We have had quite the first week down here in New Zealand. While we would love to fill you in on all of it, we thought it would be best to share one of the highlights from earlier this week.

The other night, we all went kiwi hunting. If you don’t know what a kiwi is, or think it’s the fruit (or apparently the native people), it’s not. A kiwi is type of endangered bird native to New Zealand. They are what we described as a mix between a gopher, a chicken, a chipmunk, and a duck. However this is a terrible description, so I suggest looking them up or scrolling down to see our video.

Our group left after dusk with our red spotlights, and red headlights. The kiwi are not disturbed by red light, however, it did make the forest seem straight out of a horror movie. This effect was brought out even more clearly after the rain made the pathway into a large marsh pit, coincidentally enough, is also where kiwi like to hang out best.

We split up into two groups at the start, and ventured off in separate directions of the loop: Mangatawhiri track. We were both unsuccessful for the first hour, although it was obvious they were near from the constant calls. We met back up halfway around the loop, and then one the groups decided to go back and stake a bridge they had passed earlier. The bridge was a good vantage point over much of the marsh and our red spotlights had great visibly from there. Eventually the group leader with the spotlight passed what appeared to be a duck. They did a double take, and realized it was the famous kiwi! A couple seconds later, another one appeared out of the darkness. Two members of this group were staring at the stars, which could clearly be seen due to zero light pollution, but unfortunately, missed both. In fact, they thought the group was lying.

A bit later, both sections met back up, and continued back to the bridge, where we saw a kiwi running across the water. We thus named it, Kiwi Jesus. As exciting as this excursion proved to be, it was time to head back and eat our vegetable stew, cooked professionally from members our program. The rain had subsided from earlier in the day, so cooking, although difficult the day before due to the downpour, was much easier this time around.

Check out our kiwi bird footage here and here!

We also watched a movie, with our entire cult packing our van, as one tent could have fit everybody. For some reason, we decided the best way to go about this, was putting the iPad at the back of the van, so that we all craned our necks for Catching Fire, where Jennifer Lawrence played an Oscar deserving role of Katniss. Then we retired to our tents. What a day!!

Written by Heath and Sawyier 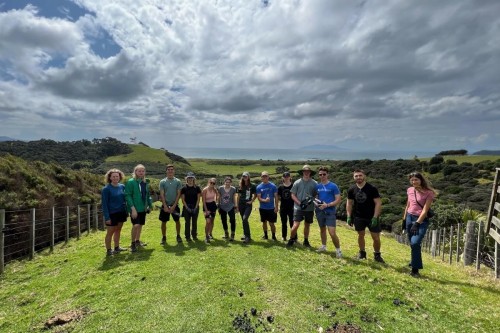