A story of mangoes, sandcastles and haikus (by Lucy)

What is the best way, you may ask, to get young adults to bond with each other? Put them in teams and then tell them they’ll be participating in a competition. The rules of the game are simple: complete the tasks, protect your mango, win the game.

We set our scene on the tropical island of Koh Lanta, Thailand. Think white, sandy beaches and picturesque, azure seas. One bright, clear morning, Tari (our instructor) asked us to meet her on the beach at 7:00 for PD Core activities. None of us had any idea what that entailed, but since it began with a pleasant swim in the ocean, we expected it to be rather mundane. Our idea of what Core involved was still entangled in our memories of the monotony of high school.

The game had begun, but we didn’t know it yet. We had to lift and carry one of our members down the beach to a canoe to retrieve our budget money and then return to Tari. She divided our group into 6 pairs, with each pair receiving 100 Thai baht (~$3.20 USD) as their budget. At this point, none of us really knew what was going on. Some of us had just rolled out of bed. And thus, the chaos began. Tari informed us that there were 6 mangoes buried on the beach and that each team’s objective was to find and protect as many mangoes as possible. Stealing was allowed - and highly encouraged.

We sprinted down the beach, looking for signs of recently disrupted sand. Shane was the first to strike gold. He unearthed a bag of 4 plump mangoes, and then the murders began. We swarmed to him, chased him, and tackled him to get to the golden fruit. The poor mangoes were treated most inhumanely in the ensuing brawl. They were tossed and squeezed and torn apart until their flesh had been peeled from their pits. The beach was covered in fruity carnage. Some teams discarded the pits in disgust. Someone asked Tari if having the pit counted as having the full mango. She said yes, and the game was back on. My partner (Ethan Davis) and I had snatched 2 discarded mango pits and we were eager to continue. 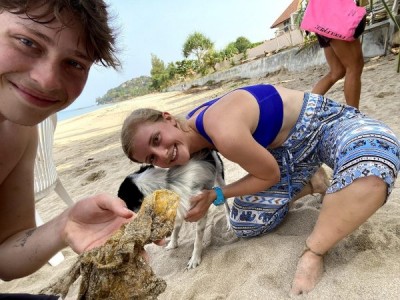 Our next task was to build a sand castle for our mango king/queen/non-binary monarch. The castle was considered complete once we had a photo of it taken on Tari’s phone. Whilst teams were occupied building their castles, other teams seized the opportunity to steal mangoes and ransack the opposing teams’ castles. Ethan Davis and I tried in vain to defend our castle, but alas there is very little one can do in the face of a charging Blake. At least we managed to protect our mangoes. A little ways down the beach, Addie had become a single parent to her mango. Her partner had temporarily abandoned her to change his clothes (he was plastered in mango guts after the initial bloodbath) and she was dutifully building her castle and protecting her mango sovereign at the same time. 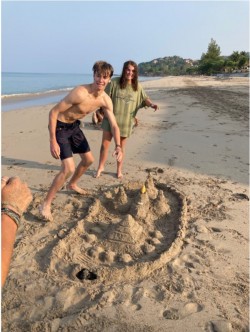 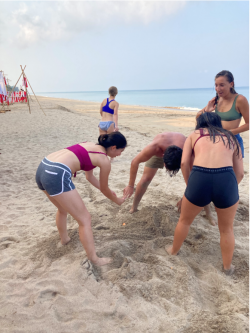 Once our sandcastles lay in pieces and our mangoes were refreshed from their morning swim, it was time for breakfast. This too, was a part of the game. Our goal for breakfast was to have a silent, mindful meal with our partners. The only thing that disturbed the peace was the continual stealing of mangoes. Many brave mangoes were separated from their parents, and still more were simply trampled in the battles. Tari also set out a task list for us to read during breaky (aka breakfast, for all the Americans). As we waited for our breakfast, groups began tackling on the mammoth number of tasks. These included assignments such as: 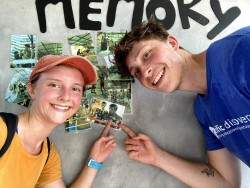 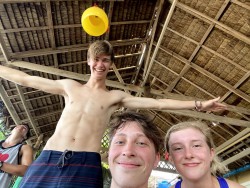 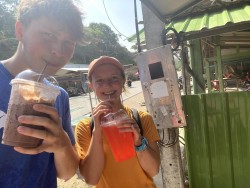 Tari was standing by to tally up points and to award bonus points for things like creativity or actually having a mindful breakfast. She encouraged our chaos. At one point, another team stole my team’s budget money. Then the gloves came off. Ethan Davis and I buried their water bottles in the sand. We also locked everyone’s doors and took their room keys. Another group was given a handicap and could assign one of their tasks to each of the other groups. There was a lot of whining associated with that one. Many wambulances were called. Wah.

The game took over our entire morning as we all raced to complete our tasks, earn the most bonus points, and sabotage the other teams. As we all returned to the beach where we began and the competition drew to a close, we sat in a circle to debrief and enjoy the communal snacks that (some) groups contributed. We also shared the poems we had written. The haiku that Ethan Davis and I wrote is below for your enjoyment:

There is a lot of trash here

In the bag it goes

In our defense, we were under a time crunch and had just finished our beach cleanup. I won’t include the other poems here because then I’d be embarrassed by how much better everyone else’s was. 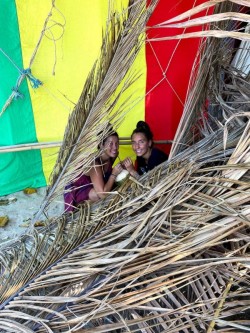 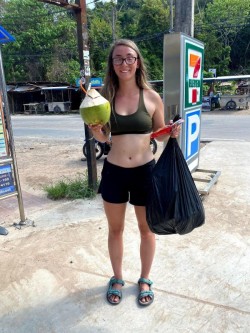 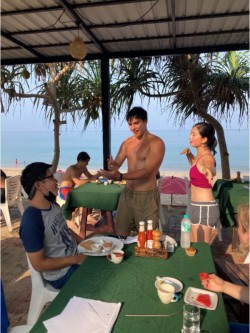 Here’s what we learned from the debrief - the game brought out a competitive side of everyone that I had never seen before. We are such an emotional group, and along with that competitive spirit went a lot of anxiety and other volatile emotions. Some people felt that others had gone too far. Some enjoyed not having to play by the rules. I found it an interesting case study that as soon as competition was introduced, our primal instincts took over and our higher level thinking vanished. Everyone was focused on winning, and as a result there was a lot of blame, accusations, and denial. Our sense of empathy went out the window.

We all agreed on one thing though - we enjoyed the time we spent with our partners. Tari purposefully paired us with members of the group whom she felt we hadn’t connected with lately. And though I was thoroughly exhausted and covered in a mixture of sand, sweat, and mango guts, I had fun. Ethan Davis and I realized that we had a wonderful time making strategies to complete tasks together. Oh, and it also doesn’t hurt that we won the game. Between points from our tasks, bonus points from Tari, and bonus points by peoples’ choice (which we got for being so cute), we emerged victorious. Our prize was epic bragging rights and a fruit smoothie. 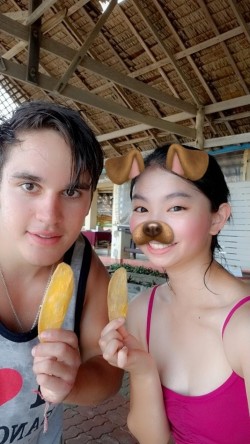 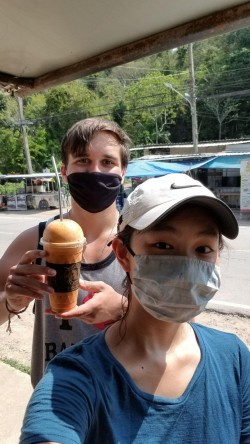