Rafting Through the Amazon Rainforest!

Although the end of our trip is edging ever closer and our reunions draw nearer and nearer, this group of explorers continues to take in every beautiful moment. The story picks up during our stay in Baños. We kicked it all off by walking to the local hot springs just under a gorgeous waterfall. At the base of this waterfall was a tribute to the virgin Mary, a partner to the statue topping the opposite side of the ridge. Both of these sites are staples of this primarily catholic community. As we all steamed in the murky mineral water, Kara took the time to get a pool-side massage. She emerged from the privacy tent more relaxed than she had been in weeks. The same could be said for the whole group after an incredible first day soak.

The next couple days presented many options for the students with two free afternoons. Almost everyone found their way to the central market for a lucrative and delectable meal from one of the many venders there. Sahaja took quite a liking to a traditional Ecuadorian dish called llapingachos. Such a liking that she ate there six times in our handful of days in the city. She was eagerly joined by Nyah who feasted on massive plates of camarones, one of the few dishes on this trip that agrees with her dietary restrictions. If you ventured further from the hostel to another market in town, you would have an opportunity to try another traditional Ecuadorian dish, horandos. On one fateful morning, the intermediate Spanish class did just that. With potato tortillas and meat served straight out of the pig, each bite was an instant dose of joy. Aidan, a true food lover, went as far as to say it was the best meal of the trip. 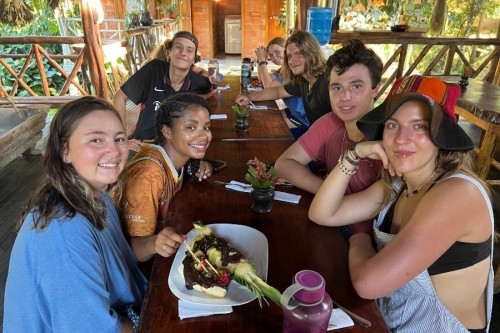 Following these incredible meals, the group had a number of adventure options to fill the open afternoons. Molly rallied a large number of reluctant participants to do a preliminary rafting adventure. Everyone thanked her immensely afterward as it was an incredible adrenaline filled experience. The waters of the Pastaza river were especially high that day. Huge smiles were displayed across all faces as both boats of rafters were tossed to-and-fro by the jagged liquid mountains and snowy white tips that topped each rapid. Elle especially enjoyed the experience as she sat over the nose of the raft as it charged hard into the next set. It was a truly powerful sight to behold. One that will be shared with you upon our return, courtesy of the amazing videos taken by the guides. At the same time, Syd, Ginny and Luke found themselves clutching the face of a massive cliff while rock climbing. As they dangled off the side of the canyon, the river their comrades were rafting rushed far below them. They pushed all the way to the top conquering the physical challenge they had set out for the day. To cap off the Baños portion of the trip, the gang packed up and went canyoning. We repelled three waterfalls followed, slid down another and ended with a short free fall swing that produced many screams.

After saying goodbye to Baños, we said hello to the Amazon Rainforest! It was finally time for the highly anticipated two day rafting and camping trip. Before hopping on the boats, we trekked along a stream into the jungle where we found an incredible natural pool filled by a powerful waterfall. With assistance from our guides, the group climbed to the top of it for the chance to launch ourselves into the pool below. On our way back, everyone slid into a natural water slide that carried them peacefully down river. After lunch, we finally mounted up and got on the river. Every moment lived up to the hype. The scenery was gorgeous. Towering bluffs, rich dense jungle and luscious hills surrounded us as we dodged the massive boulders inhabiting the middle of the river. 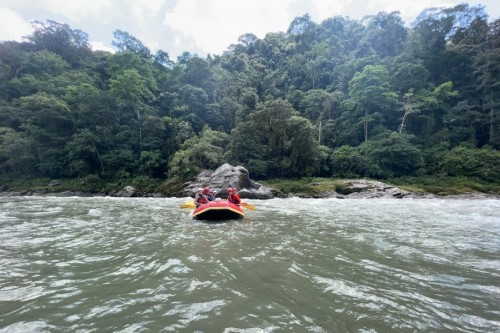 After setting up at our beachside campsite, it was game time. Balthi eagerly arranged a futbol match driven by his nervous anticipation of this week’s Europa league fixture between his hometown team, Eintrach Freinkfurt and FC Barcelona. Students, guides, instructors and locals alike joined together and played their hearts out on the volcanic mudflats that preceded the beach. The whole thing boiled down to another beautiful example of the international language and bond that is created by the presence of a soccer ball. Add it to the list of incredible places and people we have played with on this trip.

Later that evening, Jason put members of the group through the oddly enjoyable torture that is the silent game of Mao. After much frustration from all parties, the group had a welcome intermission. During this time, we ventured to the beach to watch a presentation from a local Kichwa community by a bonfire. A group of youth informed us about their traditional clothing and staples of the culture through words and dance. Towards the end, they pulled members of the group in to dance. It was hard to miss Brandon in the middle getting his groove on in a way only Brandon can. What a way to cap off an amazing day. 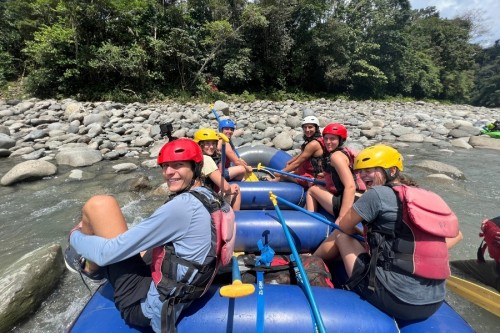 The next morning, we woke up and prepped for another full day of rafting. Ginny had gotten a huge bug bite after a night in the jungle, but otherwise all went smoothly. That leads us to where we are now, the Sinchi Warmi community. An all woman built and run Kichwa establishment. Other than being one of the most beautiful places we have stayed, this place has so much to offer. They provide in depth glimpses of traditional Kichwa practices, crafts and daily tasks. There’s a lot I could say about this place, but I’ll leave some material for the next team captain.

There it is, this week in review. An update on everyone in this group. As for me, Ayden, I wrote this blog and that’s enough said on my behalf.