Our Quest For Zac Efron in Thailand

I was sitting in my room in Ao Nang, catching up on some reading on one of our free days, when suddenly, McKenna and Cabell came crashing in, saying, “Zac Efron is in Thailand!!” I was shocked. “He was spotted in Phuket!” they continued. We soon hatched a plan to find him. Our hunt for Zac in Thailand had begun. 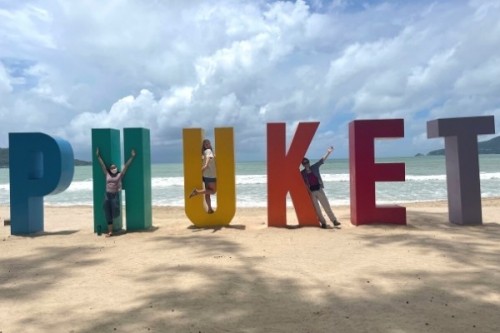 Our first stop was the hot springs in Ao Nang. These springs are naturally heated, similar to the ones in Japan. When we arrived, there were two different types. The first one was a large heated pool where the warm water flowed from one end of the pool, draining on the other side. The second were natural hot springs where the warm water flowed directly from the hot springs, cascading between huge tree roots and rocks creating pools of water to sit in. Several of us were sore from our recent rock climbing adventures, so this was the perfect way to loosen up. We searched in all parts of the park for Zac, but we were out of luck. At least we enjoyed our time soaking in the springs! We will just have to keep looking.

What a better way to search for Zac in Koh Lanta than to take a bike tour of the island! We rode around the island on dirt roads, snaking through the rural communities and farms. This island is very different than anywhere we’ve been so far on this program, so we all enjoyed seeing new environments. We learned about the rubber plantations and how the growth of that industry has affected the economy. We stopped for lunch at a small restaurant deep in the jungle to enjoy fried chicken, sticky rice, sweet potatoes, taro root, and fresh fruits, spread out on banana leaves. Our bike ride back along the ocean was wonderful! 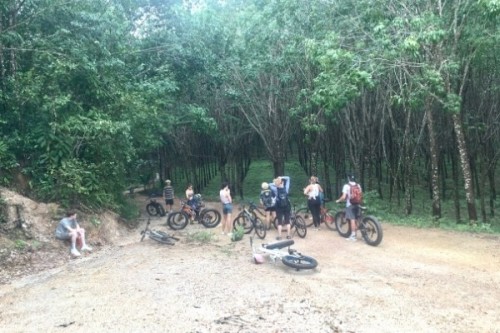 Despite biking around the island, we still had no luck finding Zac! We decided to head to Old Town Koh Lanta to continue our search. Maybe Zac wanted to pick up some souvenirs for family and friends! Our group wandered around the beautiful city, peeking into the artisan shops that lined the streets. Some of us stopped to get some delicious snacks. Fried bananas, fresh fruit smoothies, and spring rolls have become some of our favorites. To our disappointment, Zac was nowhere to be found! The shops, snacks, and beauty of Old Town was so worth it, but we will have to keep looking!

Before leaving Koh Lanta, we decided to explore a local national park first, because maybe Zac wanted to take a hike in between filming takes for his movie. As we headed up the trail, we realized very quickly that the trail was a little harder than expected. There were fallen trees on this narrow and steep path, but we continued through the brush until we reached a flatter, paved trail. The rest of the hike was very nice, opening up to beautiful views of the ocean from a sprawling beach. Then, we climbed up to a lighthouse, which turned out to be a great place for photos! Zac is still nowhere to be found and is really missing out on these cool adventures we’re having!

Next, we packed up our 40 pound backpacks and traveled to Phang Nga! We were hoping that Zac loves elephants as much as we do, and we’d find him at Phang Nga Elephant Park. We met up with the founder of the elephant conservation park to learn about the ways to support ethical elephant tourism. We spend the next four days shadowing a mahout as he cares for the elephants. We bathed the elephants, cleaned their sanctuary, cut down banana leaves for them to eat, played with them, walked them to the jungle at night and most importantly… fed them endless bananas! They remind us of puppy dogs, just a whole lot bigger! Unfortunately, we did not find Zac Efron at the elephant home, but the time we spent with these incredible animals made up for it! 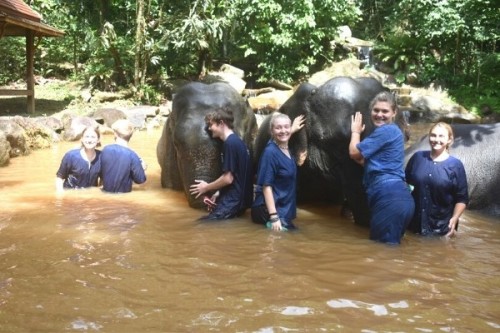 Since we didn’t see Zac near the elephants, we decided to search for him on a boat. We hopped on a super long, colorful longtail and took off to sea. We figured our bright boat would draw us some extra attention and maybe catch Zac’s eye. We cruised around beautiful islands for a while, eventually arriving at a floating market community. This collection of homes, shops, markets, and restaurants are fully floating on the ocean. The community is complete with a mosque, a school, and a medical center. It even has a soccer field! We enjoyed the floating city from the boat and then explored the soccer field in more detail. As seen in High School Musical, Zac is more of a basketball guy, so we decided to move on. We enjoyed our lunch on a quiet beach after taking a nice swim in the warm waters. On our way home, we saw something odd. Could it be? No, no chance….. From a distance, we thought we saw Zac! But as we drew closer, we realized it was just a sand bed, but in the middle of the ocean. How cool! We all jumped off the boat and enjoyed this unique swimming experience. We could truly wade out to the middle of the bay! Zac must be visiting all the wrong places. 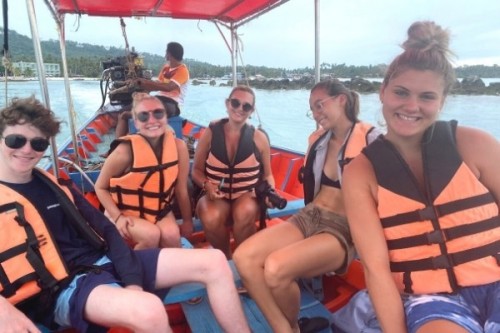 We had officially run out of luck searching for Zac in the south, so we all hopped on a plane and headed to Chiang Mai. We had such a fun time touring the city. Our day began by visiting the statue of the three kings who built Chiang Mai. We moved on to a couple temples one of which was over 600 years old! We learned a lot about Buddha and the story of his life, then preceded to move on to the market. This street market was massive, filled with many colors and aromas. It was so cluttered I actually got lost inside of it! With the tour finished and our pockets filled with Thai sweets, we went home for the day in awe of the wonderful Chiang Mai. Zac still was nowhere in sight. We decided to head north to check one more place.

Perhaps had made his way north to the mountains near Chiang Mai to experience the cool(er) mountain air and beautiful rolling hills dotted with fields, or perhaps to learn about the culture of the local hill tribes. We checked into an Ecolodge and we’re disappointed to find that he hadn’t been seen in the area, but instead we met some representatives from the Daughter’s Rising organization, which works to support local communities, specifically young women who are at risk of sex trafficking. They told us about the farm they’ve been setting up to grow food for the local village, and we decided to lend our hands for a few days. We spent three days hard at work clearing weeds and setting up a new vegetable patch, fertilizing the baby orchard, and planting coffee beans with the help of some local children. We didn’t find Zac, but we hope that we at least helped empower the community and we definitely learned some farming skills!

On our last day working with Daughter’s Rising, we learned that Zac has moved on to New York! It’s unfortunate for us, since our search is over, but we’ve thoroughly enjoy our adventures as we searched for him.