Highlights on the Halfway Point of Hawaii Mini

Just a few days ago marked the halfway point in our Hawaii Mini Semester adventure! We have been in Hawaii for a little over three weeks now, and I already have so many memories that I will cherish forever. Here are just a couple of my many highlights.

Camping on the beach under the stars at Ho’okena beach park in Kona was beautiful and definitely out of some people's stretch zone but a serene and humbling experience as well. During that week we got to attend surf camp for three days and learn how to shred like a pro. Okay, maybe not a pro, but by the end of only three days everyone had gotten up on their boards and many were catching waves on their own!

Then we were lucky enough to meet with local Hawaiian Rosa who taught us so much about the history and culture of hawaii. Much I was completely unaware of and helped me gain clarity as well as a sense of sadness; for how native Hawaiians have been walked over and disrespected for years. I myself come from an island fueled by tourism and people oblivious to the history and local traditions; so I sympathized heavily when she explained the blatant disrespect and toll it’s taken on the island itself.

After lessons with Rosa we took an active turn and faced the Captain Cook hike, a short trek down a steep rocky mountain side to a beautiful cove blossoming with life. The views were immaculate and the ocean filled with an abundance of coral and multicolored fish. A splendid spot for snorkeling. After soaking in the sun for a couple hours it was time for the hike back up. The way up was a struggle for sure but with lots of water, positive vibrations, and my earbuds in I made it to the top. Reaching the top of the mountain felt so gratifying, I was beyond proud of myself and my team for pushing through the pain and hot Hawaiian heat. Afterwards we got to get some of the best gelato I have ever had, which was a plus.

Currently as I'm writing this as we are stationed at Big Island Farms. This has got to be my favorite accommodation so far; with its lush greenery and abundance of fruit and veggies. We are also near Waipi’o Valley, a sacred place where once Hawaiian royalty frolicked. The land and nature is fertile, plentiful, and radiates positivity. Some even say it is magical. Honestly I believe it. Hawaii is the most powerful, empowering, and magical place I've ever stepped foot on.

There is nowhere else I'd rather be spending this confusing and kind of awkward time period of my life. One of my goals for the program was to feel less lonely and lost in the world. I feel as if I've accomplished both. I’ve made friendships that will hopefully last a lifetime with quality people that genuinely care about me. I’ve never felt more accepted in my life. It’s crazy how a bunch of strangers are now my best friends. As for being lost and pondering direction for my life, I may not know exactly where I am going but at least now I'm on a path. I’ve learned to be more optimistic, lean into the discomfort and to live in the moment. At the end of the day you can only control the now, no need to worry about the future. Manifest your own reality, you can do it. 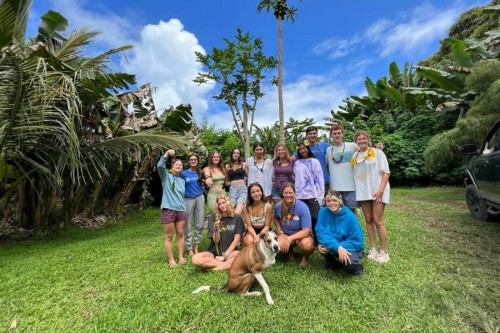